Breaking off ice on wings 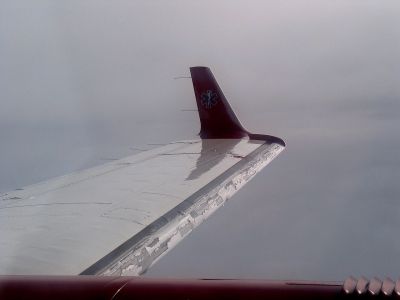 In addition to weight and control issues, ice accumulation on aircraft also has environmental impact. The increased power needed to lift and control the plane translates to increased fuel consumption and emissions. As single point actuators, electromechanical systems have very low power requirements.

Researchers evaluated concepts based on three different phenomena (anisotropic behaviour, vibration modes and buckling) to determine which one promised the best performance of the erosion shield. Analyses led to selection of the anisotropic behaviour, which employs optimisation of materials and geometry to obtain complex deformation patterns.

The team then chose aluminium plate with triangular stiffeners and carbon fibre-reinforced plastic plate for manufacture of the mock-up. The first round of simulations and mock-up testing has been successfully accomplished. At this point, scientists are optimising the manufacturing process and the sample materials to achieve better agreement between theoretical and experimental results.

SMARTERSHIELD technology for de-icing of aircraft wings is expected to have important economic and environmental benefits. Getting rid of ice on wings will reduce aircraft load and enhance lift. In turn, this will cut fuel consumption and associated operating costs and emissions. Finally, de-icing means greater control and manoeuvrability, which translates to enhanced passenger safety for important societal benefits as well.