A ‘smart’ knife to fight cancer, crime and contamination

A ‘smart’ knife to fight cancer, crime and contamination 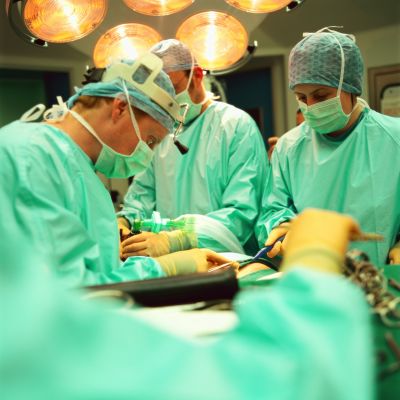 Cancer is one of the most challenging medical issues we face. In the United Kingdom alone, there are 300 000 new cases every year — leading to almost 2 million surgical operations annually. Thanks to ERC funding, Dr Zoltán Takáts of Imperial College London has developed a ‘smart’ surgical knife that can ‘smell’ the tissues it is cutting through — with the potential to revolutionise cancer treatment, as well as food and drug analysis, and research into the human ‘microbiome’.

The instrument, which the researchers call the ‘iKnife’, uses a mass spectrometer to analyse the ‘smoke’ produced by a scalpel that cuts using high-frequency electric current. From this, surgeons receive real-time feedback on whether the tissue they are cutting is cancerous or healthy.

Dr Takáts’ project, DESI-JEDI IMAGING 1 , has already reported a successful trial of the technology in the journal Science of Translational Medicine, which attracted a great deal of press attention. During the study, the project built up a database of signatures for different cancers — including brain, breast, lung and colonic — by taking tissue samples from more than 300 patients. The iKnife was then used in 80 surgical operations, and in every case its real-time results matched the traditional tissue analysis carried out after the operation.

‘We didn’t expect to get this far in the project when we made the original proposal in 2007,’ says Dr Takáts. ‘But in the six weeks since our paper was published we’ve gone on to complete our clinical experiments and have shown the technology is ready for application — so we are now close to beginning official clinical trials with a view to regulatory approval.’

Mass-spectrometers measure the mass-to- charge ratio of ionised (charged) particles by passing them through electric or magnetic fields. Scientists use them to analyse the chemical composition and structure of samples.

The big breakthrough for Dr Takáts came when he realised that new surgical techniques — such as ultrasound-, laser or electrosurgery — produced charged particles of tissue which were ideally suited as input to a mass spectrometer. His first simple experiment — using pork liver and off-the-shelf surgical instruments — worked beautifully, with results much better than expected. ‘For this fantastic tool, we immediately started thinking about applications — we looked for problems where an imaging mass spectrometer could help transform the landscape.’

Currently, a surgeon would take a tissue sample and have it analysed (called a ‘biopsy’) by a histopathology laboratory — with at least a 40-minute wait — before knowing whether to continue the operation. But by using an air pump to ‘suck’ particles from the site of the surgery to the mass spectrometer — the iKnife can supply instant feedback to the sur- geon so that he or she can avoid cutting away more tissue than is necessary to remove all tumorous or inflamed cells. Leaving more of the remaining tissue intact will improve medical outcomes and patients’ quality of life.

From science to surgery

‘We are now moving to official clinical trials,’ says Dr Takáts. ‘We expect to see the start of trials in brain surgery early next year.’ This has proved a challenge, since the design of all three of the instrument’s components — the electro-scalpel, the database for identification and diagnosis, and the mass spectrometer tailored for the operating theatre — must be finalised before clinical trials begin because it cannot be changed after approval.

‘The ERC’s Proof-of-Concept (PoC) Grant was of key importance to this,’ says Dr Takáts. ‘The Starting Grant gave us a huge opportunity to set up the research group and do the science, but we really needed the PoC funding to look into regulatory issues, intellectual property management and starting up a company to bring the instrument to market.’ The iKnife has been developed for electro- surgery, as this is preferred by cancer specialists, but the technique is also applicable to hydro- and laser surgery. New applications for the tool could also include analysis of mucous membranes and the respiratory, urinogenital or gastrointestinal systems.

Its usefulness for tissue and substance analysis has led the team to have talks with food industries and crime-fighting agencies. It could also be a powerful new tool for microbiologists, accelerating the creation of databases of the microbial population inhabiting our bodies. ‘The millions of bacteria that live in — and on — us may be linked to cancers and illnesses like diabetes,’ says Dr Takáts. ‘Identifying them may help in diagnosis and treatments. We now have a unique tool to look into the fine detail of those interactions — leading to new approaches and therapies.’

The project was coordinated by Imperial College, London, in the United Kingdom.