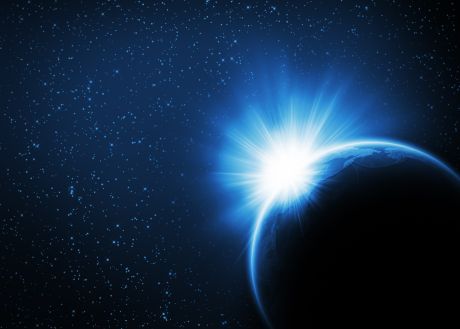 Magnetic field reconnection is a key process for particle heating and acceleration during solar flares. Turbulence was not accounted for until numerical simulations allowed the exploration of mutually coupled phenomena spanning a broad range of scales.

Solar flares are observed as the result of eruptions in magnetic field structures that are anchored to the Sun through sunspots. To better understand the physics of this solar activity, EU-funded scientists turned to magnetic field reconnection.

In its classical picture with a single current sheet, reconnection cannot reach rates high enough for the rapid energy release observed in solar flares. Moreover, there is a huge difference between magnetic energy input and the fluxes of accelerated particles.

The SERAF (Solar eruptions and flares: Bridging the gap) project aimed to bridge the gap between the dimension on which energy enters – namely the thickness of the current sheet – and the scale of energy dissipation. A similar problem is also faced in classical fluid dynamics, where the scale of energy input – typically the tube diameter – is larger than the molecular scale.

In viscous fluids, the scales in between are filled by the cascade of small vortices through which energy is transported to shorter scales. The SERAF project team sought to overcome the scale gap in magnetic reconnection using the concept of multiple magnetic islands, also called plasmoids that could play the role of vortices.

This picture of turbulent magnetic reconnection was studied in detail through 3D numerical simulations covering a broad range of scales. The fragmentation of the current sheet at different spatial and time scales together with the re-scalability of magneto hydrodynamics (MHD) equations allowed SERAF scientists to reproduce the phenomenon.

Specifically, the scientists used an MHD code based on a finite element method with a self-adaptive mesh to represent the formation of continuously smaller plasmoids. The simulation results were validated by solar observations from the Acatamalarge millimeter/submillimeter array (ALMA) in northern Chile.

The cascading reconnection confirmed by the SERAF project results can reconcile the large-scale dynamics of eruptive phenomena with the small-scale nature of particle acceleration. A long-sought connecting link between "classic" and "chaotic" scenarios of energy release in solar flares has just been found.