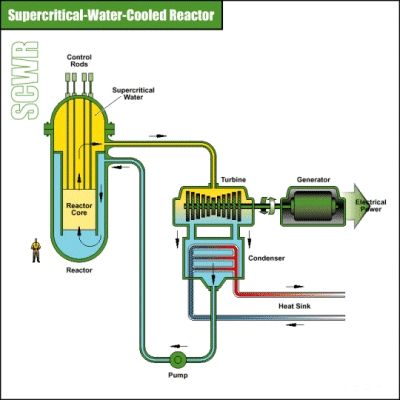 A fuel qualification test (FQT) is planned for the development of the next-generation nuclear reactors. An EU-funded consortium has unveiled the experimental test facility containing a small fuel assembly comprised of multiple fuel pins.

Tests to evaluate the effect of water corrosion on materials for the fuel and core structures are planned to be performed in the LVR-15 research reactor in Řež, Czech Republic. With the support of EU funding, the main aim of the project SCWR-FQT (Supercritical water reactor - fuel qualification test) was to test a small-scale fuel assembly under temperatures and pressures up to 600 oC and 25 MPa.

SCWR-FQT worked on developing the necessary FQT facility that features a supercritical water loop as well as safety and security systems for the research reactor in the Czech Republic. The tests were performed to measure the effect of radiolysis and water chemistry on corrosion of cladding materials. They covered typical conditions occurring close to the core outlet, where the coolant temperature is hottest.

Project work was also geared towards designing an electrically heated test section in the supercritical water multipurpose (SWAMUP) facility in China. The candidate materials for the cladding of fuel and core structures were commercially available stainless steels of nuclear grade, including 347H, 316L, 08Ch18N10T, 316Ti.

Samples were exposed to supercritical water of different oxygen content. While high oxygen content had a negative impact on the corrosion of materials, no significant effect of oxygen levels on the mechanical properties was observed. Based on the results of corrosion tests as well as strain rate tests, stainless steel 316L was chosen as the most appropriate cladding material for the envisaged fuel qualification test.

Both heat flow and temperature distributions of the entire fuel assembly were defined. The cladding temperature was found to stay well below the acceptable limits for a total heating power of approximately 64 kW. Furthermore, neutronic and thermo-hydraulic tests carried out at the SWAMUP facility helped refine the full-scale FQT design.

Project outcomes were disseminated through various conferences, workshops and publications that helped consolidate the findings and paved the way for eventual construction of the full-scale FQT facility. This advanced facility will be built at the LVR-15 research reactor in the Czech Republic, once all the licensing by the Czech authorities is completed.