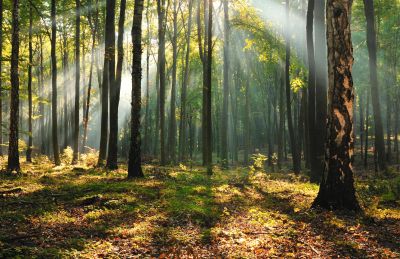 Although forests are dynamic systems, the speed of change to which they are subjected is now at an unprecedented level. This is due to factors such as climate change, nitrogen deposition, the introduction of invasive species, and the loss of biodiversity and habitat.

At present, our ability to predict the consequences of all these changes is limited as the response of forests is the result of complex interactions between all individuals and species. Because of the enormous number and diversity of tree species in the world, understanding how each of them responds to non-biological factors and how they interact is a truly daunting task.

One solution is to use functional traits to describe diversity, which define species in terms of their ecological roles (how they interact with the environment and other species). This enables species to be organised according to their ecological strategies, much like chemical elements in the periodic table.

The project 'Tree demography, functional traits and climate change' (DEMO-TRAITS) is collecting forest data to discover how tree traits determine trees' competitive interactions and responses to climate. The database covers all the planet's major forest habitats, from boreal to tropical rain forests, and includes more than 2 500 species and 7 million trees.

Project partners are analysing how the density of competitors and climatic conditions influence the growth and survival of individual trees. Their unique approach reduces the size of the computer model by estimating how species parameters relate to the functional traits of both the tree being measured and its competitors.

Additional analysis is focusing on how traits determine species' responses to climate stress and whether there is a trade-off between species' tolerance to climate stress and their competitive ability. This information will be used to develop individual-based simulations that can predict the dynamics of a forest in terms of its functional composition.

The work carried out by DEMO-TRAITS will help to predict climate change impacts on forest ecosystems and the role of functional diversity in forest productivity. This information will be extremely valuable to managers of forest resources and policymakers.