Rivers and the global carbon cycle 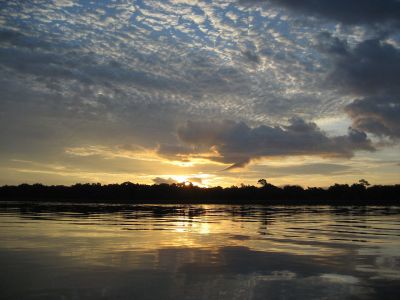 Sunrise on the Congo River
By Bsm15 (Own work) [CC BY-SA 3.0 (http://creativecommons.org/licenses/by-sa/3.0) or GFDL (http://www.gnu.org/copyleft/fdl.html)], via Wikimedia Commons

Researchers have made progress in understanding how streams and rivers influence global carbon and nitrogen cycles.

Massive amounts of organic carbon and nitrogen are buried naturally each year as part of global nutrient cycles. Rivers and streams play an important role in this process, but the mechanisms of deposition are not yet clear.

The EU-funded BIO-ERODS project aimed to shed some light on this important topic through experimentation. Project partners hoped to identify the mechanisms responsible for depositing organic carbon and nitrogen at the interface of stream and riverbed.

Researchers conducted two major experiments. The first tested how organic matter in stream water was influenced by biofilms and the geology of the streambed. They found that clay particles adsorb all kinds of organic particles. This experiment also provided a proof-of-principle for the BIO-ERODS hypothesis, allowing researchers to progress to the second experiment.

The BIO-ERODS project has revealed the dynamics of organic particle deposition in streambeds for the first time. This work underlines the importance of rivers and streams to the global carbon cycle, and will inform future global modelling efforts.