REDUCING ENERGY USE BY AIRPORTS 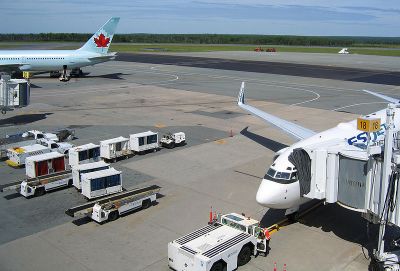 Airports are big energy consumers – and that’s before a plane takes off or lands. The daily electricity and thermal energy used by a large airport compares to that of a city of 100,000 people.

There are around 500 airports in the 28 European Union member states and even the smallest one consumes energy like there’s no tomorrow. The goal of the EU’s three-year CASCADE project – ICT for Energy Efficient Airports – is to help airport managers reduce their energy needs and cut the CO2 emissions caused specifically by their high-consuming heating, ventilating and air conditioning (HVAC) plants by 20 % in the short term.

The nine CASCADE partners , funded with EUR 2.6 million from the EC’s 7th Framework Programme , aim to do this by means of new software, coupled with an energy action plan based on the international management standard ISO 50001, and algorithms for fault detection and diagnostics. Using the CASCADE system, faults can be detected quickly and automatically before the systems are damaged or fail, or too much energy is wasted, and thus help airport maintenance teams implement corrective actions and improve the performance of equipment in the plants.

It’s perfect timing for airport managers, as they are under pressure to help the EU meet its 20-20-20 goals (one of them being to cut domestic emissions 20 % by 2020) by economizing in energy management. And for this they need tools which provide adequate support. CASCADE provides them with such a tool, integrating it with the existing ICT solutions already installed at airport facilities.

HVAC SYSTEMS CONSUME 50% OF ALL ENERGY AT AIRPORTS

Rome’s Fiumicino and Milan’s Malpensa airports, the two biggest in Italy, agreed to act as pilots, dedicating personnel and resources to the project. Some 55 million passengers use these airports every year. Around half of the energy they use is consumed by heating, ventilation and air conditioning (HVAC) systems, so reducing this by 20% will significantly reduce overall energy consumption at the airports.

‘We are not targeting the whole airport infrastructure,’ said CASCADE coordinator Nicolas Réhault , head of group building performance optimization at the Fraunhofer Institute for Solar Energy Systems in Freiburg, Germany. ‘Our objective is to save 20 % energy on these targeted systems by optimizing savings and with the knowledge we gain we then want to replicate the solution at other airports.

Focusing on the HVAC systems – especially the large air handling units, chiller plants and cooling towers the airports use – the project team installed hundreds of new sensors, meters and advanced data loggers at the two airports to step up measurement of parameters such as temperature, pressure, flow rates, electrical consumption, etc.

Engineers using this new measurement framework can control and benchmark equipment performance and optimize user behavior. Coupling this to fault detection tools, they have been able to root out problems in scheduling (equipment running when it’s not needed), incorrect heating and cooling settings in different areas of the airport, poor positioning of sensors or actuators, lack of calibration or maintenance, unbalanced pipe and duct systems, and so on.

After the first six months of the pilot phase, the CASCADE system has already detected some control and sensor faults in large air handling units that provide Fiumicino Terminal 1 with fresh air. Estimated savings of 500 MWh, which corresponds to about 3,500 tons of CO2 or 70 000 EUR a year, are achievable just by implementing low-investment measures like resetting the controls or replacing faulty sensors, the researchers found.

SOFTWARE COULD BE APPLIED TO OTHER COMPLEX BUILDINGS

Interest in the project has extended across the EU. Airports Council International has committed its support to the proposal by providing a channel to demonstrate the results to 400 of the 500 EU-28 airports. The CASCADE consortium hopes that through its network other airports will integrate the CASCADE software tool into their energy management plans.

There will be other applications for the CASCADE software, as Nicolas went on to explain. ‘Airports are very complex infrastructures. We have gained a lot of know-how on how these infrastructures work. This can be replicated to other highly complex buildings such as hospitals and banks. And it could be downscaled to simpler things, too.’

Link to project on CORDIS