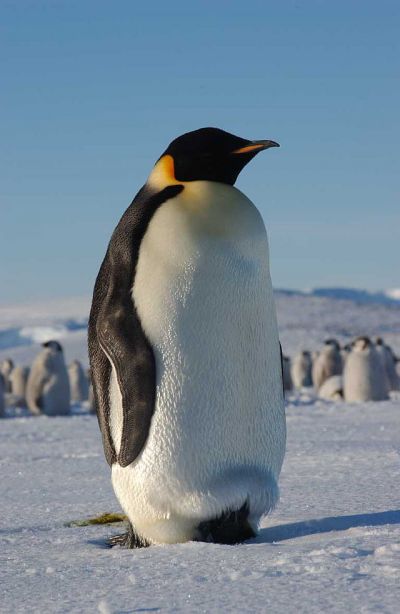 Giant penguins bigger than most humans roamed the Earth millions of years ago. Analysis of 37-million-year-old penguin fossils by a team of researchers from the La Plata Museum in Argentina shows that the so-called ‘colossus penguin’ stood at staggering 2 metres from toe to beak tip.

The giant penguin would have weighed as much as 115 kg. By comparison, the Guardian adds, the tallest and heaviest living species today, the emperor penguin (Aptenodytes forsteri), stands at 1.1 metres and weighs just under 50 kg.

And it seems that Palaeeudyptes klekowskii was not the only penguin species thriving in the Antarctic all those millions of years ago. It was actually a veritable penguin paradise! New Scientist quotes Carolina Acosta Hospitaleche of the La Plata Museum research team who says that the era was a ‘wonderful time for penguins’ with 10 to 14 species living together along the Antarctic coast at this time.

The large frame of the ‘colossus penguin’ would have brought with it some useful benefits. New Scientist tells us that larger penguins can dive deeper and stay underwater longer than smaller ones. Acosta Hospitaleche says that a giant like Palaeeudyptes klekowskii could have stayed down for 40 minutes, giving it more time to hunt fish. Discovery News is quick to add another advantage to the list - it claims that the penguin’s impressive height would have qualified it to play in the USA’s NBA basketball league!

The excavations of Palaeeudyptes klekowskii fossils have been concentrated on Seymour Island, off the Antarctic peninsula. According to New Scientist, this was a warmer region 40 million years ago, with a climate like that of present-day Tierra del Fuego, the islands at the southern tip of South America.

The Guardian tells us that this species is not the first giant prehistoric penguin to be discovered – in 2007 a penguin species known as Icadyptes salasi which lived 36 million years ago was found in Peru with a slightly smaller height of 1.5 metres.

According to the abstract of the report published in Geobios, discoveries like Palaeeudyptes klekowskii are significant for the study of the anatomy and evolution of penguins, in particular regarding the Antarctic species included in the genus Palaeeudyptes.