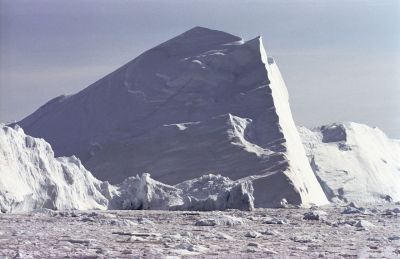 Science magazine reports that 'fast ice' usually holds back the icebergs in the winter. However, regional warming due to climate change means fewer days of fast ice each year so the icebergs can drift into shallow waters.

As the summary in Cell Biology notes, 'In the last half century, there have been massive losses of winter sea ice along the Antarctic Peninsula, as well as retreat of glaciers and disintegration of ice shelves coincident with rapid recent regional warming. More calving from glaciers and ice shelves coupled with less winter ice should increase scouring of the seabed - which is where most Antarctic species live'

According to Science, when the icebergs drift into shallow waters, they 'carve huge gashes through the habitat of the colourful, tentacled invertebrate animals carpeting the sea floor.'

Science details how the study research the team examined the spatial distribution, diversity, and interactions between and within species from 1997 to 2013, along with scours from the ice each year. The results were 'sobering', the magazine notes.

Most species weren't able to recover from the increasingly frequent ice invasion. However, one species - a moss-like animal encrusted on the rocks - continuously survived and edged out other species. Science adds, 'It now has a near-monopoly in the area, the study found-and that could make the whole region more vulnerable to invading species'.

Perhaps most disturbing of the results, is the study team's report of a 2013 survey dive at a nearby locality (Lagoon Island). This revealed large areas where no live mega- or macro-fauna could be found, 'the first time this has been observed there despite being regularly visited by scientific divers since 1997'.

The team predicts that warming is likely to increase ice scour mortality and could aid the establishment of non-indigenous species. The consequences are grim. The study in Current Biology concludes that hard surfaces in the shallows will become deserts 'dominated by rapidly colonising pioneers and responsive scavengers'.