Jeffrey Sachs: We need a sixth wave of sustainable and green technologies 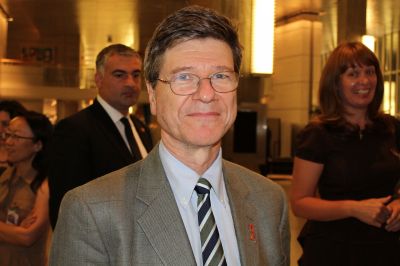 We have reached planetary boundaries - human pressures on finite, earth systems are at a tipping point. However, the technology to address this near catastrophe is now within our reach, according to expert in sustainable development, Jeffrey Sachs.

The situation is grave - in April, CO2 concentrations reached 400 parts per million for the first time in 3 million years. Emissions are heading to a 4-6.1 degree Celsius 'likely' increase in temperature, when most experts agree that we must stay below a two degree increase in order to avoid irreversible disruption.

Sachs, a renowned economist and senior advisor to the UN, noted, 'We are trespassing on fundamental planetary boundaries, the most dramatic of which is the rise of the greenhouse gas concentrations ...The path we need to be on takes the two degrees limit seriously and understands the carbon budget that goes along with it.'

Sachs underlined the importance of political agreements in achieving this, in particular the outcome of UN climate change negotiations in Paris and the establishment of internationally agreed Sustainable Development Goals (SDGs) next year. However, these must go hand in hand with an intense focus on technology.

'The good news is we are sitting on a complete revolution of technology that allows us to move in a sustainable direction. That's a matter of choice though. Markets alone won't take us there. We have to decide on planetary scale, we're going for a sustainable, green, inclusive economy.'

Sachs pointed to Kondratieff's graph of the five economic waves experienced since the beginning of the industrial revolution. He called for a sixth wave based on intelligent technologies to lead us towards 2050. 'We need a sixth wave of sustainable and green technologies ...so that we can provide to all the people of the planet in a way that is environmentally sustainable.'

According to Sachs, the key players on climate change - the US, EU, China, India, Russia, Australia, Canada and the Gulf countries - are the economic units who can change the course and adopt the sixth wave of economic growth.

Some argue that the technology is not yet well developed enough to meet the huge challenges posed by climate change. Sachs pointed to our tremendous capacity in recent years to quickly improve technology and reduce costs. 'Since 1980, we have an increase in the number of mobile subscribers from 20 000 to 7 billion today... The cost of sequencing a human genome has decreased from $100 million in 2001 to about $1 000 today - a halving of the cost roughly every nine months ...And, there has been a dramatic decline by 100 fold in the cost of photovoltaic cells since 1977'.

We do, however, have development cycles to go with some technologies, according to Sachs. 'We need to turn fleets of cars into zero or low carbon and the scale management and commercialisation still has technological cycles to go ... Regarding wind and solar, there is a challenge in storage and management of the grid ... Many people believe that carbon capture and storage is a potential technology but it is unproven - it is done on small scale but scale is pertinent.'

The key, according to Sachs, is to create practical, manageable pathways for deep decarbonisation based on a technological revolution. National deep decarbonisation pathways should be based on technical and structural improvement for energy efficiency; the decarbonisation of the power sector enabled by smart grids; the electrification of final energy demand; the reduction of process emissions from industries (e.g. cement, steel) and the reduction of emissions from land use, land use change, and forestry.

'Every country should make a road map with a commitment to technology diffusion programmes of key solutions. The world needs to invest in technologies on a large scale. If we invest tens of billions, the return could be trillions.'

Some climate change experts insist that it is too late to turn things around but Sachs was adamant as he closed his address in the Green Week auditorium, 'We have the know-how, technology and the urgent need to do it so let's do it.'